20200121, Guardian, Coronavirus: Chinese hospitals not testing patients, say relatives – Number of cases, and deaths, could be much higher than those cited in official reports if claims are true

//On 12 January Huang got news his healthy 65-year-old mother had been checked into a hospital in the central Chinese city of Wuhan with a fever and a cough. […]

The hospital pressured the family to immediately cremate Huang’s mother, but they refused, asking for more information. A few days later, they relented and workers from a funeral home, also in protective clothing, retrieved, cremated and buried her within a few hours, leaving the family no time to say goodbye. Afterwards, the staff disinfected the van they had travelled in and threw away their hamzat suits.

“My mother’s death was dealt with without any dignity,” said Huang, 40, who did not want to give his or his mother’s full name. “She wasn’t even counted as a number on the government’s list,” he said, referring to the six people authorities say have been killed by the virus.//

I’ll try to add to my collection of News Clippings regularly if I can. Here are a few added on 20200120:

//China’s National Health Commission has confirmed human-to-human transmission of a mysterious Sars-like virus that has spread across the country and fuelled anxiety about the prospect of a major outbreak as millions begin travelling for lunar new year celebrations.

Zhong Nanshan, a respiratory expert and head of the health commission team investigating the outbreak, confirmed that two cases of infection in China’s Guangdong province had been caused by human-to-human transmission and medical staff had been infected, China’s official Xinhua news agency said on Monday.//

China’s War on the Internet

Author James Griffiths @jgriffiths gave an insightful talk “China’s War on the Internet: How the West Lost the Web” at Foreign Correspondents’ Club, Hong Kong @fcchk talking about his new book, The Great Firewall of China: How to Build and Control an Alternative Version of the Internet. Have a watch.

“China’s War on the Internet: How the West Lost the Web”

Comments Off on China’s War on the Internet |

I’m sorry to say 2018 #HumanRightsDay (Dec 10th) was a sad day when former Canadian diplomat Micheal Kovrig (update: and Mr. Michael Spavor) were detained in China with no reason given. (China taking Mr. Kovrig as “hostage” over the arrest of Huawei CFO Ms. Meng Wanzhou?!) Where is due process? Where is rule of law? I understand he served as political lead on Prime Minster Trudeau’s visit to Hong Kong in September 2016, so on a personal note, I feel sorry for Consul General Mr. Jeff Nankivell and others in HK that Mr. Kovrig might have worked with in preparation of that 2016 visit.

How “lucky” Canadians must be to be stuck between two superpowers fighting a trade war? One superpower has a president that locks up human rights lawyers (including blind human rights lawyer) and makes dissidents “disappear”. The other superpower has a president who clearly sees himself above the law and has no idea of what “judicial independence” means. Even his former secretary of state recently said in public, “the president would say here’s what I want to do and here’s how I want to do it and I would have to say to him, Mr. President I understand what you want to do but you can’t do it that way. It violates the law.”

If there is #TeachableMoment in all this mess, it is that one must try to respect the rule of law, due process, and judicial independence. Even now it seems we really got used by both sides to fight their beeping trade war!
P.S. Incidentally, Trump/US government has imposed tariffs on Canadian steel and aluminum using Section 232 of U.S. trade law claiming our steel and aluminum are “threats to American national security”.

P.P.S. Former Canadian Amb. to China Mr. Guy Saint-Jacques has this to say:

"In China, there's no coincidence": Former Canadian Amb. to China @guysaintjacque1 says, in his view, the arrest of former Canadian diplomat Michael Kovrig is part of China's effort to put political pressure on Canada over the arrest of Huawei CFO Meng Wanzhou pic.twitter.com/xDd9rP9mpz

This sentence (from a CBC News report) kinda highlights the difference between Huawei CFO Ms. Meng Wanzhou’s case and the trumped up detention of Mr. Michael Kovrig (currently on an unpaid leave of absence from the Canadian embassy): “China’s Foreign Ministry on Wednesday denied knowledge of the detention of a former Canadian diplomat, as Chinese citizens rejoiced over a Canadian court’s decision to release a top Huawei Technologies executive on bail.” END_OF_DOCUMENT_TOKEN_TO_BE_REPLACED 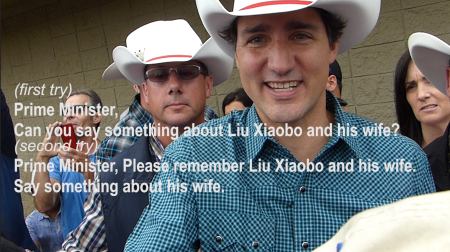 So far Canada has very muted responses to Liu Xiaobo‘s death (on Thursday July 13, 2017) and his wife Liu Xia‘s continual house arrest. Foreign Affairs Minister Chrystia Freeland tweeted she is “terribly sad” and issued a strongly worded written statement including the words but, as far as I know, nothing was said in-person on camera by neither Minister Freeland nor Prime Minister Justin Trudeau himself. Here is an excerpt from the written statement (download a PDF file with my highlights and notes),

“In particular, my thoughts go to Mr. Liu’s wife, Liu Xia, herself a tremendous symbol of courage and poise, who remains under house arrest,” Freeland said. “We continue to call for the release of all political prisoners.”

I have, so far, been unable to find any evidence of Canadian reporters asking Trudeau, on camera, about his view of Liu Xiaobo‘s death and his wife Liu Xia‘s continual house arrest. Since Mr. Trudeau was visiting Calgary yesterday for Stampede, I thought I would try my best to ask him a question myself. I thought, on the day of Liu Xiaobo‘s funeral (yesterday, Saturday, July 15), it was the least I could do to pay my deepest respect to Xiaobo and did my small part to try to shine a light on Xia‘s continual house arrest and get the PM to do more help free her.

Here is a video of my attempts in asking Trudeau. I have included some additional footage so you can see my questions in context of the crowd.

I asked Prime Minister Justin Trudeau my first question as an independent reporter. For my second try, I took off my reporter hat and paid my respect to Liu Xiaobo by making a request to my Prime Minister as a Canadian citizen with Hong Kong heritage. On the sady day of Liu Xiaobo‘s funeral, when I’ve read reports of Chinese government sending secret police to pretend to be his best friends (many were too young to be his “best friends”) at the funeral, reports of his wife forced to burn his body to ashes and spread the ashes into the sea so no one can pay his grave site proper respect, I thought the least I could do to pay my respect to Xiaobo and did my small part was to try to shine a light on freeing Xia from her continual house arrest. 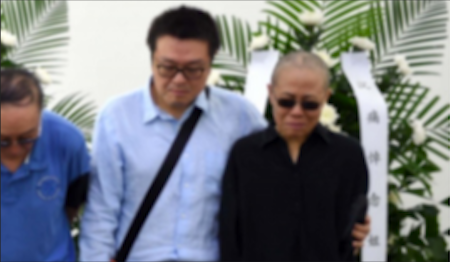 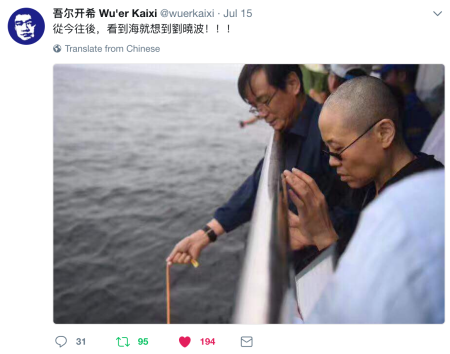 Photo of Liu Xiaobo’s ashes being spread at sea. Photo credit: Tweet of 吾尔开希 Wu’er Kaixi. Here is a Medium article “Murdered but Undefeated” by Wu’er Kaixi that I hope to read soon.

P.S. As reported by Radio Canada International (RCI), Governor General David Johnston was “on a state visit to China from July 10 to 14, accompanied by a large delegation of Canadian politicians and business leaders“.

“Chinese President Xi Jinping met with Johnston in Beijing on Thursday, urging both countries to expand cooperation in such areas as trade, law enforcement, technology and culture, and launch negotiations on a free trade agreement at an early date, reported the official Chinese Xinhua agency, which had no mention of Liu’s passing.“

Given the Chinese government’s self-proclaimed meaningless “rule-of-law” which lead to the shameful premature death of Mr. Liu Xiaobo and continual house arrest of Liu Xia, any discussion of cooperation in law enforcement is absolutely premature. How can we be sure any cooperation in law enforcement is absolutely Charter of Rights and Freedoms compliant under the current Chinese judicial regime?

July 16, 2017 update: Foreign Affairs Minister @cafreeland tweeted, “Canada continues to call on the Chinese govt to release #LiuXia and offer her safe passage out of China, according to her wishes. #LiuXiaobo” at 5:26 PM – 16 Jul 2017 from London, England

“China cremated its only Nobel Peace Prize laureate, Liu Xiaobo, on Saturday, but watchful officials allowed only his widow and a few other mourners to bid farewell to the man who was also the country’s most famous political prisoner.

Later in the day, Mr. Liu’s ashes were lowered into the sea in a simple ceremony, ensuring that there would be no grave on land to serve as a magnet for protests against the Communist Party, especially on the traditional tomb-sweeping day every April.“

“It would be hard to imagine a more obscene display of Canada’s slavish relationship with China’s depraved Communist Party regime: The very moment imprisoned democracy activist and Nobel Peace laureate Liu Xiaobo died under heavy guard on a hospital bed in the northeast city of Shenyang on Thursday, a beaming Governor General David Johnston was posing for photographs at the opulent Diaoyutai State Guesthouse in Beijing, shaking hands with Chinese tyrant Xi Jinping, Liu’s jailer, and tormentor.

Liu’s death marks the first time a Nobel peace prize winner has died behind bars since the pacifist Carl von Ossietzky died in a Nazi concentration camp in 1938.“

“Master” is the new version of “AlphaGo” which Demis Hassabis stated, in the post game press conference with 9 dan Go player Ke Jie (柯潔), the details will be published for others to study similar to AlphaGo’s Nature article.

According to Demis Hassabis, the CEO and founder of DeepMind, this time out the machine is driven by a new and more powerful architecture. It can now learn the game almost entirely from play against itself, relying less on data generated by humans. In theory, this means DeepMind’s technology can more easily learn any task.“

The Future of Go Summit, Match One: Ke Jie & AlphaGo

“Much of that future has yet to play out. And there is no guarantee that AI improves humanity. “In some cases,” grandmaster Gu Li said after a pair game alongside AlphaGo, “I could not follow in his footsteps.” But certainly, DeepMind has effected real change in the world of Go, a game that’s enormously popular across China, Korea, and other parts of Asia, and that is a comforting thing. In at least one way, AI has helped make humans better.

After losing matches to AlphaGo, European champion Fan Hui and Korean grandmaster Lee Sedol said the machine opened their eyes to new possibilities. This raised awareness was on wide display this week in China, when Ke Jie opened the first game with a strategy straight from the AlphaGo playbook.

Ke Jie went on to lose that game and then the next. And some observers continued to lament that machines were eclipsing humans. But that’s not the story of AlphaGo’s trip to China. What’s most striking is how closely the players have studied the games played by AlphaGo—and how hungry they are for more. Many have repeatedly called on DeepMind to release the many games that AlphaGo has played in private. They know they can’t beat the machine. But like Thore Graepel, they believe it can make them better.“

Comments Off on The Future of Go Summit: Ke Jie & AlphaGo |

A documentary about the Wukan Village’s (烏坎村) Democracy Experiment that happened after the protests is a film that I wish I had the guts, access, ability, and talent to make. Have a watch of the full six-part series playlist on Youtube (more info on Aljazeera) or you can click the episodes below. Also check out Lianain Films’ James and Lynn Facebook and website.