2020 July, “Russell Crowe Breaks Down His Most Iconic Characters | GQ”

New additions to my collection of Quotes I Love. I and these are all from the wise and insightful late Carrie Fisher (1956 – 2016). All quotes found from this Inc. post so I seriously hope they fact-checked them all.

“Resentment is like drinking poison and waiting for the other person to die.” – Carrie Fisher (note: I fact-checked this one via Google books search with hep from this 2017 Quote Investigator post)

“Stay afraid, but do it anyway. What’s important is the action. You don’t have to wait to be confident. Just do it and eventually the confidence will follow.” – Carrie Fisher

“Going through challenging things can teach you a lot, and they also make you appreciate the times that aren’t so challenging.” – Carrie Fisher

“No motive is pure. No one is good or bad — but a hearty mix of both. And sometimes life actually gives to you by taking away.” – Carrie Fisher

“It’s the most amazing thing to be able to forgive.” – Carrie Fisher

“I heard someone say once that many of us only seem able to find heaven by backing away from hell. And while the place that I’ve arrived at in my life may not precisely be everyone’s idea of heavenly, I could swear sometimes — I hear angels sing.” – Carrie Fisher

In life, I believe we can and should take stock and learn from #TeachableMoments whenever we can. I don’t play tennis but I see lots to learn from 2019 US Open Champ Bianca Andreescu (and her interaction with 23 times grand slams and multiple US Open Champ Serena Williams)!

I went to a pub and it was a ton of fun watching Bianca played and won live with other Canadians! But I learned a lot more from her many post-game press conferences, news articles and off the court behaviours (who can forget her Rogers Cup on court moment (see video) with Serena?!) and desire to inspire the next generation of tennis players (especially Canadian female players).

Bianca is so talented and look at what she achieved in just one year! What an epic year! I LOVE quotes, and there have been much online talks of  attribution/misattribution of quotes involve underestimating/overestimating what one can achieve in one year or five/ten years. But another way of looking at it may be to simply give Bianca‘s visualization process (?) as mentioned in the news and her press conference a try. In fact some Twitter user pointed out that Bianca writing herself a cheque for winning the US Open when she was young and her visualization process was not unlike what fellow Canadian Jim Carrey did (see Jim’s video interview with Oprah). (NOTE: One day I may write more about why this is important to me but that can wait for now.)

=====  References & Sources of inspirations for my #TeachableMoments =====

* CTV News Toronto (with video of viewing party in Toronto), “The most Canadian way to accept a trophy? Bianca Andreescu says ‘sorry’”

END_OF_DOCUMENT_TOKEN_TO_BE_REPLACED

Comments Off on Bianca Andreescu, US Open Champ #TeachableMoments | 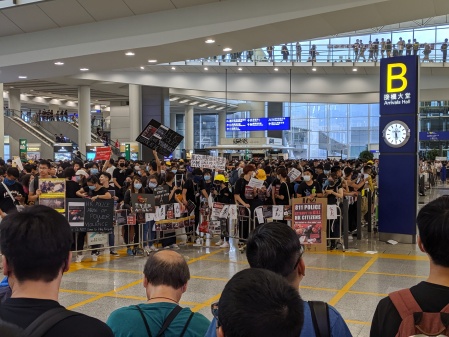 Comments Off on More Heartbreaking News From Hong Kong |

Bought James Comey‘s “A Higher Loyalty: Truth, Lies, and Leadership” the day it came out as a Kindle ebook and I’ve enjoyed reading it so far. And I got a chance to start reading the “James Comey’s memos” (PDF file) (via CNN).

Watched a whole bunch of Comey TV interviews and enjoyed all of them. Here are some samples.

I was introduced to the luxury footwear designer Christian Louboutin (1964 – ) thanks to my late French friend Laurent as he happened to know Christian as a family friend. Here are a few videos I am watching today. And I’m thrilled to include Louboutin to my Great Minds of Our Time series.

I wrote and shared this entry in memory of Laurent Jean Philippe Ravalec, my late and awesomely unique French friend, where one of our last video chats (which I documented here) happened in November 2015 just a day after the horrible Paris attack.

Talking to my French friend Laurent about Food (published April 7, 2012) is another video of us chatting about our common love: food!

Laurent, I miss you my friend!

Comments Off on Christian Louboutin – Great minds of our time |

(Watch my trilogy of documentaries.)

The title of my debut documentary “Long Hair Revolution 「長毛革命」” was decided in 2004, so 15 years ago. The rationale is similar to “industrial revolution” or “internet revolution”, ideas for improvement. Nothing to do with violence.

It saddens and pains me that Hong Kong today has deteriorated so badly that the word “Revolution” has now been twisted by both the HK and BJ governments to mean violence and the guaranteed and international recognized free speech right is almost gone in HK.

Director/producer/independent reporter Kempton Lam has made three full-length documentaries from 2004 – 2015. Kempton’s debut documentary Long Hair Revolution 「長毛革命」 has been collected by the Canadian National Archive since 2009. The three documentaries are collectively known as “Revolution Trilogy” 「革命三部曲」 and are in Cantonese with English subtitles (廣東話、英文字幕). You can watch the three films at this YouTube Playlist (beautifully projected on your big screen HDTV or on your computer). Enjoy!

Hon. Harjit Sajjan has been named Canada’s new Minister of National Defence by Prime Minister Justin Trudeau. The more I watch and read about Minister Sajjan, I more I admire him. Here are some items and videos that I found to help me understand Minister Sajjan a little. For the record.

November 4th, 2015, National Observer, “You have no idea how badass Trudeau’s Defence Minister really is”

HIGH SCHOOL:  In a 2012 profile by Vancouver Sun columnist Daphne Bramham, Sajjan said when he was a 16-year-old student at Charles Tupper Secondary, he started travelling in the wrong circles. His classmates included future gangster Bindi Johal, who was murdered in 1998, and others who Sajjan later helped arrest as a member of the VPD. It was during this period that Sajjan chose a different path and become a baptized Sikh.  “It wasn’t really a religious thing. It was an identity thing. I needed the commitment because I knew it would keep me on the right path. I found the true meaning of Sikhism and I loved the warrior aspect of it … When I was fighting to understand who I am, that (warrior) aspect was something that I really identified with.”

I just recently watched Philip Seymour Hoffman in The Hunger Games: Catching Fire (love him in it), I had planned to watch him in “A Late Quartet” later but now I will do so today in honour of his passing. See reports in THR, The Guardian, LA Times, THR (Theater appreciation).

This is my Cantonese interview with Horatio Tsoi, former HKTV documentary producer/director on 2013/10/27 訪問蔡錦源港視前高級編導.

Be curious. Have empathy. Wonder what it is like to be someone else.

Adding this to my long list of Quotes I Love,

“Be curious. Have empathy. Wonder what it is like to be someone else. Make a friend who is not like you.” – Roger Ebert‘s final words from his 1994 PBS 11th Hour speech

Comments Off on Be curious. Have empathy. Wonder what it is like to be someone else. |

Terrible sad day for movies lovers to hear the news that Roger Ebert is no longer with us. I’ve got the pleasure and honour to met him once in 2000 at the Toronto International Film Festival. He was pleasant, nice, and larger than life. I remember in one screening, a volunteer had no idea who he was and didn’t let him get into the theatre for a screening which got him quite upset. I think they eventually figured out who Ebert was and let him in.

I love how Ebert writes about movies and can bring out things that I miss even though sometimes our tastes are not quite the same.

Goodbye Ebert. I know wherever you are, they will be playing movies you love non-stop.

I then read these two pieces by Ebert, “A letter to Werner Herzog: In praise of rapturous truth” and “review of Encounters at the End of the World”

via PBS, “In this 1994 clip, Roger Ebert answered the question: What final message would you leave for future generations?”

TorStar, “For Roger Ebert, it was always about the movies: Howell”

I want to wish “Long Hair”, Leung Kwok-hung, happy 57th birthday, good health and all the best! Here is my 2005 documentary “Long Hair Revolution” filmed only two months after his election to Legislative Council of Hong Kong. I’m happy to say my first documentary has been added to the federal government “Library and Archives Canada” permanent collection in Ottawa.

From “ABCs of ‘behaviour regulation’ for federal librarians and archivists”

“The code says that LAC staff, which includes Canada’s leading librarians and archivists, who set foot in classrooms, attend conferences or speak up at public meetings on their own time are engaging in “high risk” activities.

Given the dangers, the code says, the department’s staff must clear such “personal” activities with their managers in advance to ensure there are no conflicts or “other risks to LAC.”

The code is already having a “chilling” effect on federal archivists and librarians, who used to be encouraged to actively engage and interact with groups interested in everything from genealogy to preserving historical documents, says archivist Loryl MacDonald at the University of Toronto.“

Comments Off on “Chilling” effect on federal archivists and librarians |

Football and Why Malcolm Gladwell may never be invited back to speak at University of Pennsylvania ever again, I think! If you love football, learn more about Chronic traumatic encephalopathy (CTE).

Malcolm Gladwell at University of Pennsylvania 2/14/2013

P.S. I would really really LOVE to know what the discussion was like at the post-talk dinner table ! :)

P.P.S. I am aware that some hockey players are affect by CTE as well and we Canadians should be ashamed of ourselves in doing nothing about it while enjoying our hockey games!

Travel is fatal to prejudice, bigotry and narrow-mindedness

Adding this to my long list of Quotes I Love,

“Travel is fatal to prejudice, bigotry and narrow-mindedness, and many of our people need it sorely on these accounts.” – Mark Twain (full copyright free project gutenberg text)

Comments Off on Travel is fatal to prejudice, bigotry and narrow-mindedness |

TED & related Talks (Some of my favourites)

Comments Off on TED & related Talks (Some of my favourites) |

Here are a few videos about Bob Dylan posted by Christopher Sykes. I LOVE interviews, masterful interviews done well are awesome to watch. These interviews are very cool. You get to see Bob drew Christopher LIVE on camera!