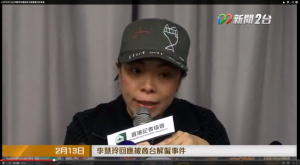 Is Freedom of Press in Hong Kong  under severe attack by HKSAR Chief Executive Mr. CY Leung as Ms. Li Wei Ling 李慧玲 (FB page) alleged? You be the judge yourself after watch the full press conference. I personally believe Ms. Li Wei Ling 李慧玲 is a person of the highest integrity through her years of journalistic work. Have a watch of the clip 李慧玲回應被商台解僱事件記者會 starts at 1m23s (full press conference with Q&A on 2014/02/13, over 1 hour long) and judge for yourself.

Comments Off on Hong Kong Freedom of Press under attack by CY Leung (HKSAR Chief Executive)? |

Is Encana trying to subvert freedom of press by using copyright law?

According to CTV News “Encana seeks to remove embarrassing audio clip from Internet“,

“Now the company is asking Chirbit to remove the clip, according to The Globe and Mail.

“Encana is the copyright owner of the Recording. It was expressly stated at the outset of the Conference Call that ‘this conference call may not be recorded or rebroadcast without the express consent of Encana Corporation,’” Encana told the web site in a letter.

“The Recording has been posted without Encana’s consent. The unauthorized use of this Recording clearly constitutes copyright infringement. … Encana views this matter extremely seriously and requests that you respond to the undersigned on or before the close of business on Friday, February 22, 2013, failing which, Encana will have no other recourse but to take all actions as may be available to it to protect its proprietary rights.”

Chirbit has declined the request, invoking fair use laws and saying that under its policy, anyone who wants audio removed from its site should ask the poster to do so.“

To hear it for yourself in order to make an informed decision, have a listen to the audio clip in question – Warning: Offensive Language. Also have a read of Globe and Mail report, “Encana wants embarrassing audio file erased from Internet“.

Please share your thoughts and comments. All comments are moderated but all fair comments will be approved and I will defend your rights to freedom of speech.

It should be noted that copyright law has been used in Canada in recent years to over-reach (in my opinion) into other unrelated areas. Take Euro-Excellence Inc. v. Kraft Canada Inc., 2007 SCC 37, [2007] 3 S.C.R. 20, a Supreme Court of Canada judgment on Canadian copyright law as an example, it ultimately is a case about the import of chocolate that somehow got twisted into a case about copyright.

Note: I have made a record of the audio clip in question as a backup in case the original recording was removed for any reason or by accident. Freedom of press is a principal worth protecting and fighting for by all working jouralists.

Comments Off on Is Encana trying to subvert freedom of press by using copyright law? |

Business reporters don’t usually write about press restrictions (or freedom of press) but my experiences in reporting on prime minister stephen harper‘s two events in Calgary this past Monday left this reporter no option but a discussion of freedom of press and that “pink elephant in the room“. (This report is cross posted at examiner.com.)

Background facts before the main discussions,

Discussion of issues raised by the above facts (with matching fact & discussion number),

Here is the report video.

In this 2006 November Norman Rockwell article where Rockwell’s “Freedom of Speech” painting was displayed, this reporter wrote,

“We need more people to stand up against the powerful and idiotic politicians in Canada, U.S., Hong Kong, and many places around the world where we have the rights to freedom of speech.“

I never quite thought that I would be the person/reporter that “stand up” and speak up against powerful politicians: writing about mr harper, freedom of speech, and naming mr harper as the pink elephant in the room. But in life, sometime things need to be done. And in this case, this reporter/blogger ended up discussing freedom of press, mr harper, and the pink elephant in the room, because of mr harper and the PMO persistence and dangerous press restrictions.

Note: When mr prentice came to Calgary the week before to talk about the new environment policy, he at least had a press scrum and answered some media questions. 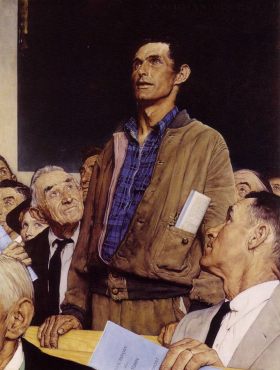 prime minister stephen harper had so much fun shutting down democracy and parliament, he has shutdown Freedom of Press as well.

From CBC “Media have no flight plan on PM’s plane” (emphasis added),

Prime Minister Stephen Harper is sneaking back into Canada through the front door.

Harper flew back from Switzerland today.

While in the air his office announced the appointment of five new Senators and the Supreme Court ruled he has the power to decide to ask if Omar Khadr could be repatriated.

What does Harper have to say about these developments? Nothing.

Journalists travelling with Harper are being kept on the plane to ensure the Prime Minister doesn’t face any questions in his short jaunt from the bottom of the staircase to his waiting limousine.

A prime minister that refuse to answer questions from the press, especially after important decisions of national significance, has lost the moral authority to govern.

Comments Off on prime minister harper shutdown Freedom of Press |