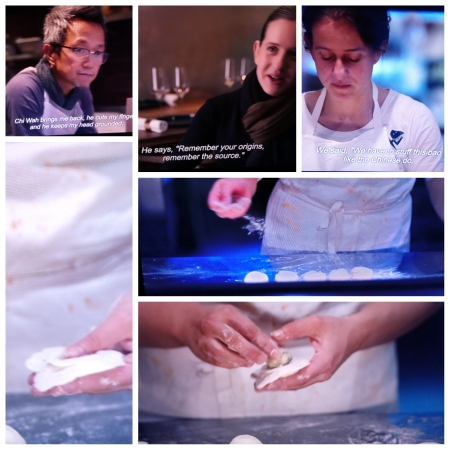 Dec 22, 2017 Update: Wonderful to try the baos (buns) yesterday lunch and got a chance to have a wonderful long chat with Chi Wah as the store was a bit quiet because of the rain in Paris.

Comments Off on Museums Restaurants Kitchens | 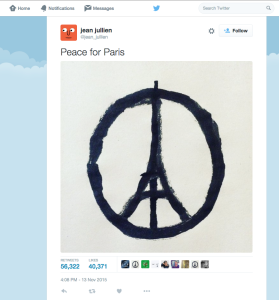 My heart broke Friday (Nov 13th, 2015) as I saw the tragedies of Paris attacks unfolded in live (minute by minute) news reports via Guardian. Since then, I’ve been reading/watching news/analysis (ref 1, ref 1b, ref 2, ref 4, ref 8, ref 9), a simple symbol of peace, and also realized other cities had being attacked in recent days (ref 3, ref 3b).

On Saturday morning out of the blue, Paris called! More precisely, my super cool Paris friend Laurent (now cool *and* magical, more on this later) pinged me online and we ended up having a wonderful Google Hangout and video chatted for a few lovely minutes. He in Paris, France. Me in Calgary, Canada. The day after horror in Paris.

Paris Calgary Friendship in the age of Google Hangout

To set things up a little. How did a guy from Paris, France and someone from Calgary, Canada become friends? Well, Laurent and I first met in 2011 and then we became good friends over the years thanks to the magic of Google Hangout. (Laurent: fourth icon at the bottom counting from the right in this 2011 screen capture, me: the 6th icon counting from the right).

Over the years, Laurent and I love to talk about good food (Ferran Adrià, elBulli, street food), fashion, and even Christian Louboutin shoes (the designer is his family friend and has promised introduction one day)! So on Saturday morning, in the dark hours of Paris, less than 24 hours after the Paris Attacks, we defiantly talked about food. Yes, we “defiantly” talked about food, good Paris food! Our little #beepyou to the terrorist gunmen. Lives are short and we were determined to live our lives to the fullest without being changed by those #beepers. (note: I am not naive, it is a given that world governments need to come up with effective strategies and appropriate actions needed to be taken carefully in the coming days, weeks, and months without being reactive and doing exactly the things the terrorists expect us to do in fear. Those discussions are for another day.)

But on this Saturday morning, we talked our shared love of Paris food, defiantly! Laurent told me about the “Tres Tres Bon” TV show on the “Paris Premiere” TV channel is a French food site (with video), where I can find many less touristy places to hunt for good food in Paris when I visit. (And we talked more than just food since then, see bottom note with links.)

After browsing around Tres Tres Bon, I found a fascinating video about yam’Tcha that put a smile on this native Cantonese speaker’s face immediately as I saw the Chinese connection/inspiration (you see yam’Tcha sounds like Cantonese words for going for Chinese Dim Sum)! Of course, I expected and confirmed from the video that yam’Tcha‘s food come with some French creative twist! 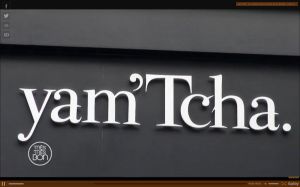 Yes, my heart is still broken as I watched families of a victim spoke (ref 5 – video)? And I know my heart will keep on breaking as more stories of lives cut short started to be reported in the coming days and weeks. But try we must, to live our lives to the fullest, without fear, and with kindness that we had before this tragedy. If we allow the terrorists to rob our kindness towards Syrian refugees and others refugees in need from around the world, or take away our respect and love of our fellow peaceful Muslim Canadians (or citizens of your countries), then the terrorists would have truly won in creating a hate filled world where we are all closed off, with locked up borders, spying on each others with total mistrust, and unfounded fear of each others. Is this the kind of world we want to leave to our future generations?

Finally, my talk of mending broken hearts is both metaphorical and literal. My friend Laurent actually had a major heart incident in June 2014 and had to be implanted with a total artificial heart (TAH info from US nih.gov) 17 months ago. So Laurent is literally being kept alive by the magic of a cutting-edge TAH as he awaits a new heart. I am not a medical doctor/researcher but here is a medical and technical post about his TAH that we hope may help other people who are waiting for heart transplant.

One of the machines that keeps my friend Laurent alive in Paris. The other machine is a total artificial heart (TAH) implanted inside him. Photo credit: Laurent

Let me quote a Facebook friend’s status from this morning as she concluded with “Paris is alive and well, despite everything.”

“Walking around Paris is very, very therapeutic for me today and I wish you could be here to experience it as well. It would make you feel better. Kids are playing. The sun is shining. Cafes are full of people having coffee. There’s a million Chinese tourists with selfie sticks. Yes, when you catch the eye of someone, there’s a silent and solemn communication. But being here is SO SO SO much better than what you are seeing on the news. Paris is alive and well, despite everything.“

Our broken hearts may seem impossible to heal but END_OF_DOCUMENT_TOKEN_TO_BE_REPLACED

Another one of my 2010 CIFF Picks: Kings of Pastry (CIFF screening time)

Are you a food lover? Well, I not only love food, when it is great food, I also want to see and experience the exquisite preparation of food. Kings of Pastry is a film about sixteen French pastry in pursue of excellence.

Here is a trailer of the film.

Here is a clip from the film.

Here is some info about the film from the filmmakers’ site (emphasis and link added),

“Imagine a scene never before witnessed: Sixteen French pastry chefs gathered in Lyon for three intense days of mixing, piping and sculpting everything from delicate chocolates to six-foot sugar sculptures in hopes of being declared by President Nicolas Sarkozy one of the best. This is the prestigious Meilleurs Ouvriers de France competition (Best Craftsmen in France). The blue, white and red striped collar worn on the jackets of the winners is more than the ultimate recognition for every pastry chef – it is a dream and an obsession.

Filmmakers D A Pennebaker and Chris Hegedus secured exclusive access to shoot this epic, never-before-filmed test of France’s finest artisans. The film follows chef Jacquy Pfeiffer, co-founder of Chicago’s French Pastry School, as he journeys back to his childhood home of Alsace to practice for the contest. Two other finalists are profiled in the film — chef Regis Lazard, who was competing for the second time (he dropped his sugar sculpture the first time), and chef Philippe Rigollot, from Maison Pic, France’s only three-star restaurant owned by a woman.

During the grueling final competition, chefs work under constant scrutiny by master judges and the critical palates of some of the world’s most renowned chefs evaluate their elaborate pastries. Finally, these pastry marathoners racing the clock must hand carry all their creations including their fragile sugar sculptures through a series of rooms to a final buffet area without shattering them. The film captures the high-stakes drama of the competition – passion, sacrifice, disappointment, and joy – in the quest to become one of the KINGS OF PASTRY.“

This film is made by the same team (co-directors Chris Hegedus and D A Pennebaker) that made The War Room. Here is an insightful “Kings Of Pastry – Doc Talk” with the co-directors.

P.S. Incidentally, love Ang Lee’s classic “Eat Drink Man Woman” and it makes me want to eat or cook some good food after every viewing. If you love food and haven’t seen the film, check it out.