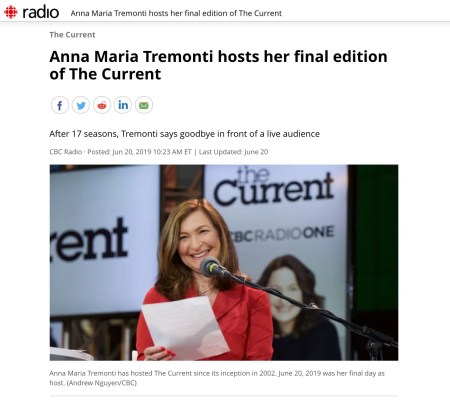 I’ll miss Anna Maria Tremonti very much as I listen to the final edition (full text transcript) of The Current. AMT is one of the best broadcasters in Canada (if not the world). I totally admire her and see her is a National Treasure! Looking forward to her new podcast.

I highly recommend you have an enjoyable listen to AMT‘s final edition of The Current.

AMT, best of luck to you from a confessed listener since The Current started in 2002!

Here is an excerpt from the last interview of AMT by Carol Off, the departing host being interviewed on her show! (emphasis added, transcript mistakes fixed and link added)

AMT: […] To be able to do that story, to be able to say to The Current I want to take half an hour of prime time morning radio and I want to talk about the rape of women in war. And the bosses say: Okay. What do you need? We’ll let you do that. That’s the gift of The Current as well we have been able to tackle those kinds of stories at a time of day when people would go ‘Oh we’re not so sure about that’. And you know what the listeners have said thank you for that. And that’s really been important to me.

CAROL OFF: Because that’s the gift of Anna Maria Tremonti because what you do with that story is that you don’t make it so horrific that no one can bear it. You tackled it as into the humanity of those stories and that has been your hallmark no matter who you talk to, no matter where you’ve gone, you have made it a hallmark of your empathy of being able to draw those people and I think what people remember most about what you have done for these 17 years is that you have made Canada your hometown. You have been from coast to coast, talking to people on the line but also going to town halls everywhere. You have connected with this country. What does that meant for you?

And here I’m adding a new quote to my long list of Quotes I LOVE,

“For 17 seasons you have been my partners in listening. In fact the most important thing I have learned in hosting The Current is how to listen, not how to talk, not how to ask questions, but how to listen. How to say nothing even and hear what someone else is really saying because I learn not in the asking but in the hearing. I learn about someone or something in the words that are spoken and then how they’re spoken and the words that are used in the exuberance, in the hesitation, in the emotion. Even the silences tell me something and they tell me something loudly.

At a world where so many people are shouting at each other, where so many refuse to hear anything but their own voice, the ability to hear another side to think differently, to question yourself, to learn something new, that is a gift.” – Anna Maria Tremonti (1957- ) (AMT’s final edition, timecode (~1hr 08min 38sec)) 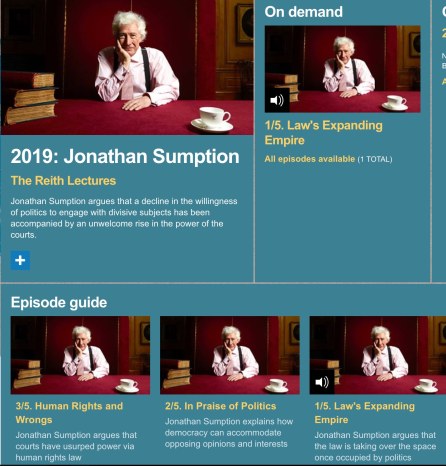 December 14, 2017, CBC Radio, ‘We can do a lot better’: Retiring Beverley McLachlin on what’s wrong with our justice system

Note: I’m looking forward CBC National’s Sunday December 17, 2017 in-depth interview by Rosie of the Chief. Will add a link when I see it. [update: Video interview has now been added!]

Comments Off on Goodbye Beverley McLachlin |

Ronald Coase, 101, Nobel Laureate: ‘I’ve Been Wrong So Often, I Don’t Find It Extraordinary At All’

Have a listen to this precious 3:41 radio interview, “Nobel Laureate: ‘I’ve Been Wrong So Often, I Don’t Find It Extraordinary At All’“. One has to deeply admire the humility in professor’s Coase‘s answers.

Note: I had a great video interview with Ning Wang (co-author with Coase) to talk about their new book How China Became Capitalist. (Sample Chapter: You can download a free sample book chapter from Palgrave.)

Comments Off on Ronald Coase, 101, Nobel Laureate: ‘I’ve Been Wrong So Often, I Don’t Find It Extraordinary At All’ |

As a journalist, I aspire to be the best I can be. No more, no less. I just hope to have the moral fiber to admit to my own past/present/future mistakes & apologize fully when the times come. At this moment, I feel the pain of Ira Glass and his colleagues.

First of all, I appreciate Ira‘s honesty and accept his apology. Secondly, after listening to Mike Daisey‘s second interview/chat with Ira re his fabricated Apple Factory story, I can no longer trust his words. Mike famously said,

“I think you can trust my word[s] in the context of the theatre.”

Huh, “in the context of the theatre”? What about things he said on TV with news media like CNBC, etc. What the heck? Was Mike serious or was he really thinking we couldn’t tell the difference between lies and truths? Under the Wikipedia journalistic scandal entry, I recognize and have followed the stories of Jayson Blair and Stephen Glass. I am wondering under what category should Mike Daisey‘s name be placed? May be under a lesson about ethics and integrity for journalists and aspiring journalists.

Update: WaPo, “Performer Mike Daisey scrubs his monologue about Apple and sticks to the facts after criticism” (emphasis added)

“Daisey portrayed his work as fact during a media blitz to promote his critically acclaimed show, and he misled dozens of news and entertainment outlets, including the popular public radio show “This American Life,” The Associated Press, The New York Times, MSNBC and HBO’s “Real Time with Bill Maher.” END_OF_DOCUMENT_TOKEN_TO_BE_REPLACED

Comments Off on RETRACTION re Apple Factory story – This American Life |

Tales of a Chinese Purchaser – worth a listen

In 2008, with the help of Simon, who has 30 years of purchasing experience, we created a series of 15 parts “Tales of a Chinese Purchaser” (about 10 minutes long per episode). Few days ago, my friend Echo kindly told me that she is learning a lot about purchasing from the series and is helping her work. So I actually started listening to it again and find that I am also learning a lot (again). And it is fun to listen.

So I am sharing my Cantonese series of 15 parts “Tales of a Chinese Purchaser” here.

Comments Off on Tales of a Chinese Purchaser – worth a listen |

Elected representatives on the team:

Jian Ghomeshi – One of the best interviewers I know

I don’t praise people easily but I just want to say if you have’t seen Jian Ghomeshi, QTV host, interview people, you are missing a lot. Jian is amongst the best interviewers I know (Charlie Rose, Mike Wallace, Ed Bradley, 嚴浩 (he is a film director but his TV interviews on RTHK 品味人生 were a great joy to watch)).

I am posting this short note because recently some stupid people played a copyright takedown trick to remove the QTv YouTube channel (but it is ok now)! I was excited to see QTv came back online because I really found out how much I love QTv.

Have a listen to my new favourite found this morning,

Have a watch of my all time favourite video interview with the wise & legendary Leonard Cohen,

Comments Off on Douglas Coupland on QTV |

Where good ideas comes from?

Comments Off on Where good ideas comes from? |

Found this nice and insightful article and a radio segment from NPR: “3D Boot Camp: A New Dimension For Live-Action Film”

Agree with this totally, “No matter how many dimensions, if it is not entertaining, no one will watch it.”

Comments Off on 3D Boot Camp |

The first door on the left changed her life

“Words by Radiolab” is one of the best radio shows I’ve heard in a long time. Highly recommended.

“It’s almost impossible to imagine a world without words. But in this hour of Radiolab, we try to do just that. We speak to a woman who taught a 27-year-old man the first words of his life, and we hear a firsthand account of what it feels like to have the language center of your brain wiped out by a stroke. Plus: a group of children invent an entirely new language in Nicaragua in the 1970s.”

iPhone 4 is not even available in Calgary/Canada yet and it has reached comedian David Letterman’s Top Ten list as a joke (see video). Apple announced on Wednesday they will have a press conference on Friday to talk about the iPhone 4 and today even a US Senator has decided to tell Apple to offer a free antenna fix.

What hurt the most is probably the jokes and damage on Apple’s brand. No brands/lovemarks are invincible.

I’ve recently linked to two interviews by CBC Radio personality Jian Ghomeshi and I think Jian does some of the best interviews in Canada.

Here is another cool TorStar video, “Jian Ghomeshi at home in lofty house“.

Comments Off on Jian Ghomeshi at home in lofty house |

Have a listen to CBC Spark Interview: Bill Buxton and Jared Spool.

Note: I am slightly biased as a big fan of Bill Buxton‘s ideas and insights. You shouldn’t be surprised because he is one of my “Great Minds of Our Time” (see others).

Using Wi-fi to “See” Through Walls

By the way, I’ve blogged about other technologies that can see through walls as well. Time Domain‘s Ultra Wideband (UWB) technology has been available to law enforcement and authorized agencies for a few years now.

Note: Because of the training needed (?), deployment of this Wi-fi technology in unknown/non-trained locations will be unlikely.

Comments Off on Using Wi-fi to “See” Through Walls |

Comments Off on Ira Glass Interview |

Have a listen to NPR’s “Facebook ‘Unfriends’ Its CFO” (I have to link to it, I admit, because of its cute title (and great content)).