In life, I believe we can and should take stock and learn from #TeachableMoments whenever we can. I don’t play tennis but I see lots to learn from 2019 US Open Champ Bianca Andreescu (and her interaction with 23 times grand slams and multiple US Open Champ Serena Williams)!

I went to a pub and it was a ton of fun watching Bianca played and won live with other Canadians! But I learned a lot more from her many post-game press conferences, news articles and off the court behaviours (who can forget her Rogers Cup on court moment (see video) with Serena?!) and desire to inspire the next generation of tennis players (especially Canadian female players).

Bianca is so talented and look at what she achieved in just one year! What an epic year! I LOVE quotes, and there have been much online talks of  attribution/misattribution of quotes involve underestimating/overestimating what one can achieve in one year or five/ten years. But another way of looking at it may be to simply give Bianca‘s visualization process (?) as mentioned in the news and her press conference a try. In fact some Twitter user pointed out that Bianca writing herself a cheque for winning the US Open when she was young and her visualization process was not unlike what fellow Canadian Jim Carrey did (see Jim’s video interview with Oprah). (NOTE: One day I may write more about why this is important to me but that can wait for now.)

=====  References & Sources of inspirations for my #TeachableMoments =====

* CTV News Toronto (with video of viewing party in Toronto), “The most Canadian way to accept a trophy? Bianca Andreescu says ‘sorry’”

* “Bianca Andreescu became the first Canadian to win a major singles title, and Canada LOVES IT”

For the record, video: Womens Finals Ceremony and Post Game Interview | 2019 US Open

Bianca Andreescu’s Road to the 2019 US Open Final

* Guardian, “Serena Williams out to overcome 2018 US Open meltdown against Andreescu – One year on from her career low point against Naomi Osaka the former champion takes on yet another prodigy”

20190905 ‘No doubt’ Bianca Andreescu will become No. 1 ranked player: Patricia Hy-Boulis (Note: On top of being a former pro tennis player “best performance at a Grand Slam came when she got to the quarter finals of the 1992 US Open”, Patricia Hy-Boulais had knownBianca for 5 years and her daughter was double partner of Bianca and of the same age!)

20190813, CBC News “Bianca Andreescu on victory over Serena Williams (NOTE: re Rogers Cup, NOT US Open), what’s next”

Not the ending we all expected, but what a moment for these two. ❤️🎾🏆 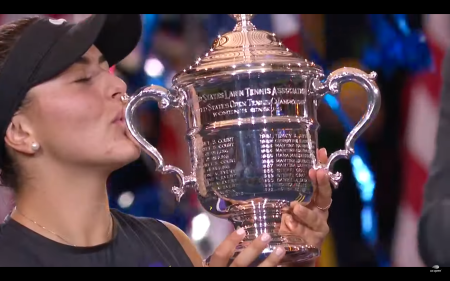 20190911 via WTA Tweet #video //Seven for seven. Relive all of @Bandreescu_’s match point celebrations on her road to the US Open 🏆🇨🇦//

Relive all of @Bandreescu_'s match point celebrations on her road to the US Open 🏆🇨🇦 pic.twitter.com/mvP6Efp6RK

This entry was posted on Monday, September 9th, 2019 at 10:14 AM and is filed under Canada, insightful, people, Video, YouTube. You can follow any responses to this entry through the RSS 2.0 feed. Both comments and pings are currently closed.